My Big Problem with Pete Buttigieg 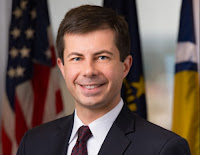 Leftist radical Pete Buttigieg, a minor political player from a minor town weighs in on the attack by Iran on the oil tankers. He said Trump lacks credibility, and there’s no real proof Iran did it. So he sides with Iran against the United States. Buttigieg is an anti-Christian bigot homosexual. Iran is a Muslim state, and Muslims murder homosexuals.

The US lets gays go about whatever they want. Won’t see any gays as mayor of any towns in Iran. Maybe enough murdered gays to populate a town.


Buttigieg lies about Christians, specifically Vice President Pence. Pence is super careful about even the perception of impropriety. Buttigieg attacked Pence, who has said only kind words about the untruthful mayor. He said, “That’s the thing that I wish the Mike Pence’s of the world would understand,”  (Pence opposes same-sex marriage). “That if you have a problem with who I am, your problem is not with me. Your quarrel, sir, is with my creator.”

Given the number of Christians in this country, well, probably not a good idea to attack them. This by a guy the claims he can unite people.


He is of course pro-abortion, pro-union, pro-LGBT, for the ‘green new deal’ though he’s done some back pedaling on that when it turned out to be so massively unpopular. He’s anti-second amendment, thinks climate change is a national security threat, wants every house in America to be a ‘net zero’ consumer of energy, and is for single payer health care. He is open borders, but its nuanced so people not paying close attention won’t think so.


He touts his overseas military service like it’s a brave thing he's done. He was there in Afghanistan, living a comfortable life, in the NATO coalition's Afghanistan Threat Finance Cell in Kabul. Mostly he was his bosses’ driver. He had to be armed doing that, so has a bunch of pictures of himself looking armed and manly. He spent seven months there (some say nine).  In ‘Nam we called these guys Rear Echelon Mother F**kers (REMF’s). He was an accountant and driver. Worthless in combat. A lot of  REMF’s were good at disrespecting those of us in the field.


So with him supporting the New Green Deal, single payer health care, being an anti-Christian bigot (while claiming to be a Christian no less) and using a bogus military profile, this guy is as phony as a three dollar bill. My disgust with him started when I found out he was misrepresenting himself at the beginning and changed to the truth once he got on the political map.